14/Aug2016 my car disappears to the lower lower wacker impound lot:
“parking in front of a hydrant” – a ticket and a tow 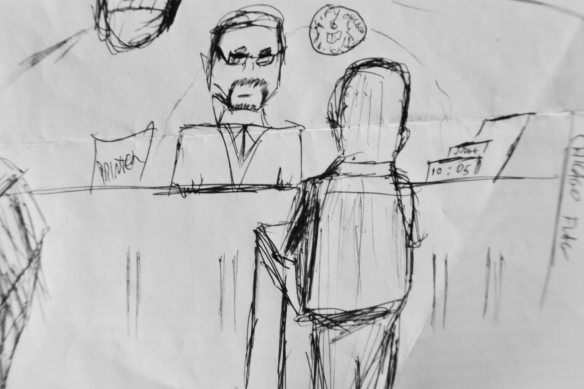 lower lower wacker is not a typo. it’s below lower wacker, which is below upper wacker. three floors down, the office of the central auto pound is housed in a white trailer at the end of a cul-de-sac of sorts. to get there one must run the labyrinth past the shantytown, or take a taxi

the city employees use archaic technology to process a large portion of that $264 million dollars. a thankless job with the most unpleasant of customers and they’re probably not pulling the same kind of clout-pussy the alderman do. if these workers taught a workshop on not taking things personally, i’d go.

no one knows the pound is there unless they’ve had to go or know someone who has, which is pretty much everyone in chicago. the first time i went was a pain in the ass, i didn’t know what to do and it was before gps so i had to write down directions, it was awful. since then i make a point to check my parking spots before locking the doors. sure getting towed is a hassle but i’m not stressed: a mistake by the city / a call to adventure. i’ll document my vindication and make a video

car at the pound

people at the pound 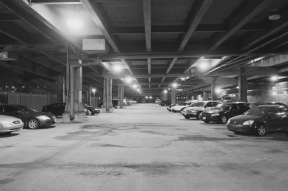 a fortune of fines 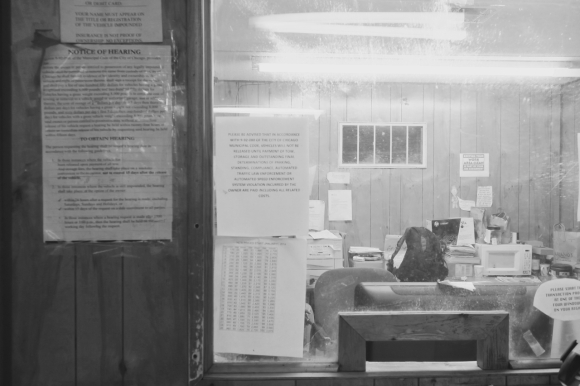 my court appearance is in river north. i arrive early to avoid a wait. before my turn i try to make a deal with the prosecutor; she isn’t having it. more and more people are showing up, it’s going to be a busy day. my evidence is photos of the space i was parked, and the hydrant. there is a lot of back and forth conversing on distance and car measurements. feels like a boxing match, i’m waiting for an opening…

prosecutor: do you have any photos of your car parked in the spot?
me: no. does the prosecution have any photos of my car parked in the spot?
prosecutor: …
me: why would i park in front of a hydrant given the history of the city burning down? seems like a sore subject and quick way to incur the wrath if you ask me. it only takes a minute to check. i checked and it was good. this is a mistake
judge: i’m going to find you not liable of the tow but i’d recommend you make another court appearance for the ticket as you may find my ruling on it less forgiving if we do it now… we are very busy today

pow! the room was mobbed by now, and a line down the hall. had i used up enough of the court’s time that the judge determined that it was worth a loss? is there a system in place, a formula, to determine court appearance time (x) vs financial cost of offense (y) and the judge is like “oh one more minute and x – y = 0 so let’s acquit and move on”? or did i just crush it?

the second court appearance, for the ticket, is on the south side. the “judge” is actually a lawyer hired by the city to hear and rule on minor offenses. we’re the only ones in the room and i’m feeling good

the ruling of my first appearance is explained. “it was a busy day, the judge requested the case of the ticket be pushed for time and here we are”. the ruling-lawyer asked a few questions before i monologued something along the lines of, “chicago’s made parking violations into a multi-million dollar industry: it’s gangster about it. but all those fines afford the city all the nice things it has. it’s why chicago works. also: the city burned down so really, parking in front of a hydrant demonstrates a lack of civic duty.”

the ruling-lawyer clears me of the ticket.

pro tip: people in chicago like hearing that their city is the best; and are out to prove it. unlike the new yorker who knows theirs is and fuck you if you got another opinion, leave.

The Toestory(abridged)
16/Aug2016, barefoot, i kick a broken flower pot and have to get stitches on my toe. it’s an accident and perhaps i should have been wearing shoes but they’re podiatrically oppressive. i document the stitches and will talk at length about making a video where instead of a broken flower pot, “Broken Flower” is a the nickname of a super tough ex-con and i kick her pot so she cuts my toe with a stiletto (blade not heel but also in heels) but i don’t have a stiletto so it’s stayed an idea 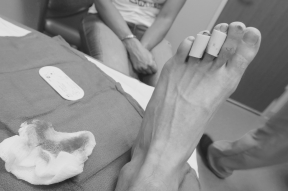